Dylan Walsh came within a single point of taking the MX1 class overall at round three of the 2021 REVO ACU British Motocross Championship fuelled by Gulf Race Fuels staged at Canada Heights on Sunday. The event also marked the return to action of James Dunn following his crash at the opening round of the series. Still sore after his heavy fall last weekend, Dylan qualified third on the REVO Seven Kawasaki but didn’t manage to pull one of his trademark fast starts in the opening moto. However, he pulled through from an initial seventh and was sitting in second in the closing stages when a collision with defending champion Tommy Searle dropped him to fifth. Second time out the 23-year-old Kiwi made no mistakes out of the gate, nailing the holeshot and leading for the full race distance to end the day in second overall and reduce the deficit to the series leader to just four points. An electrical problem in the first race forced James to pull out but in
the second moto he started to shake off the race-rust that comes with a lay-off of over two years and brought it home in a solid 13th.
Mark Yates (Team Principal) “We’re buzzing after that second moto. In the first race Dylan went from seventh up to second but came together with Tommy [Searle] and they both went down but he recovered for fifth although it cost him the overall. “We switched to a scoop tyre for the second race which was especially effective up the hill into the first turn. “I’m really pleased for Dylan. He proved today that he’s a rider who is worthy of wins and titles at this level. We’ve struggled a bit over the last few weeks with set-up – don’t forget, a 450 is new to us and we’re also learning a new bike – but I’m confident that we’re now getting there, especially with our understanding of the relationship
between the suspension and the level of engine braking that comes with the bigger motor. “We did a lot of work with the bike last week and Dylan absolutely loves the changes we’ve made so he was feeling very confident. The crash in the first moto was unfortunate but second time out he was in a different class and now we’re only four points off the championship lead with everything still to play for. “It was good to have James back in action and considering it was his first race in two years he rode very well. We had an electrical issue in the first race which forced him to pull out but in the second moto he put in a solid performance and got some decent points on the board.” 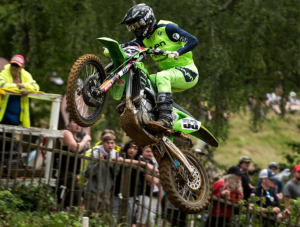 Dylan Walsh
“Today’s been much better. I made the wrong tyre choice for the first moto and got a bad start but I worked my way up to second before Tommy and I came together. For the second moto we went with a scoop, I holeshot it and didn’t look back. “I’d like to thank Mark, Sam and
Josh for the work they’ve done on the bike. It’s night and day different – it’s wicked! I’ve got that monkey off my back and feel so confident. It should have been an overall win for me but I’ll take that win in the second race and we’ll carry this momentum into the next round at Foxhill.” 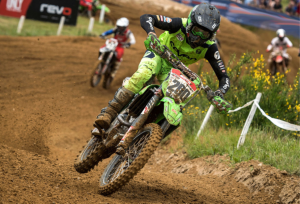 “It’s been just over two years since my last race so it feels good to finally get one done. It’s been a while. The electrical fault was unfortunate in the first moto but it’s just one of those things and we sorted it out. “I felt pretty strong in the second race and it’s nice to get it done and score some points. I feel I can now start to build on a few things.”