REVO Seven Kawasaki’sDylan Walsh was in action on Sunday at round five of the 2021 REVO ACU British Motocross Championship
fuelled by Gulf Race Fuels at Blaxhall in Suffolk. An electrical problem kept the 23-year-old London-born Kiwi off the podium but the event
highlighted his continued recovery from a serious foot injury sustained at Foxhill last month – and also showcased his team’s skills with a complete engine change undertaken in just 30 minutes. Dylan had been running fourth in the opening MX1 moto before technical issues dropped him down to seventh. A change of motors between races failed to rectify the problem and he was forced to DNF but it was still a
day of positives for the team. 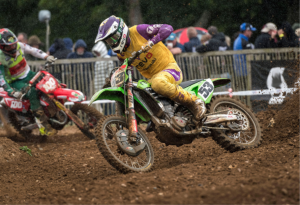 Mark Yates (Team Principal) “It was an eventful day thanks to an electrical gremlin. Dylan qualified fourth which was good and there’s no real problem with his foot – it was sore but he’s a tough guy. “In the first moto he started to lose time lap-after-lap but managed to limp home seventh and the way he explained it, it sounded like engine issues. “Obviously, we carry brand-new race engines so we swapped it out in 30 minutes – the team are so professional – and the bike sounded great but three laps into the second moto it started to do exactly the same again. “It’s obviously an electrical component and heat-related and Dylan was forced to DNF. “When the bike had cooled down it was fine so we’re going to go through it, check everything and get it on a dyno and run it as hot as we can before getting it back out on a track to test it. 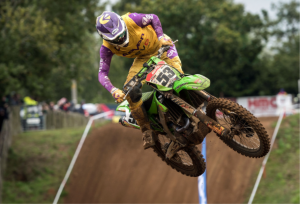